The homotypic fusion and vacuole protein sorting (HOPS) complex is required for fusion of endosomes and autophagosomes with lysosomes, a critical step for processing and degradation of enclosed substrates. VPS41 is a key subunit of the HOPS complex, but via unknown, HOPS-independent mechanisms also required for biosynthetic trafficking of regulated secretory proteins and lysosomal membrane proteins such as LAMP1 and LAMP2. My group aims to understand how VPS41 regulates these different trafficking pathways. In the first funding period we studied the pathobiology of patients with a severe neurological phenotype, caused by compound heterozygous mutations in VPS41. We found that VPS41 variants prevented HOPS function, which resulted in a delay in endocytosis, small-sized lysosomes, activation of transcription factors TFE3/TFEB and consequently an upregulation of the autophagy machinery. In addition, the mTORC1 complex dissociated from lysosomes and cells failed to respond to nutrient starvation, indicating a link between HOPS function and mTORC1 activation. Interestingly, expression of the disease causing mutant VPS41S285P inhibited endocytosis but allowed regulated secretion, showing that the endocytic and biosynthetic functions of VPS41 are differentially regulated, dependent and independent of HOPS. Since VPS41 mutations cause a neurological phenotype, we now will apply the protocols and tools established in the first period to study the biosynthetic and endocytic roles of VPS41 in neurons. We will use state-of-the-art correlative live cell to electron microscopy (CLEM) to acquire the number, size, activity, content, trafficking and distribution of endo-lysosomal sub-populations in distinct domains of cultured hippocampal neurons. We will do this in the presence and absence of VPS41, its interaction partners and other genes of interest identified in our studies. By combining CLEM with the Retention Using Selective Hooks (RUSH) system we will monitor the controlled release and biosynthetic trafficking of GFP-tagged proteins such as LAMPs and synaptic vesicle proteins. By combining RUSH with an FKBP-Kinesin3-FRB system we will segregate Golgi-derived, LAMP.GFP-positive carriers to the plasma membrane and collect these for molecular analysis by mass spectrometry. Moreover, by proximity-based interactome studies using established APEX-constructs of VPS41 wildtype and mutant forms we will identify neuron-specific interaction partners of VPS41. The ultimate aim of these studies is to understand the fundamental mechanisms by which VPS41 regulates biosynthetic and endocytic trafficking in neurons and uncover the pathophysiology of VPS41 patients. 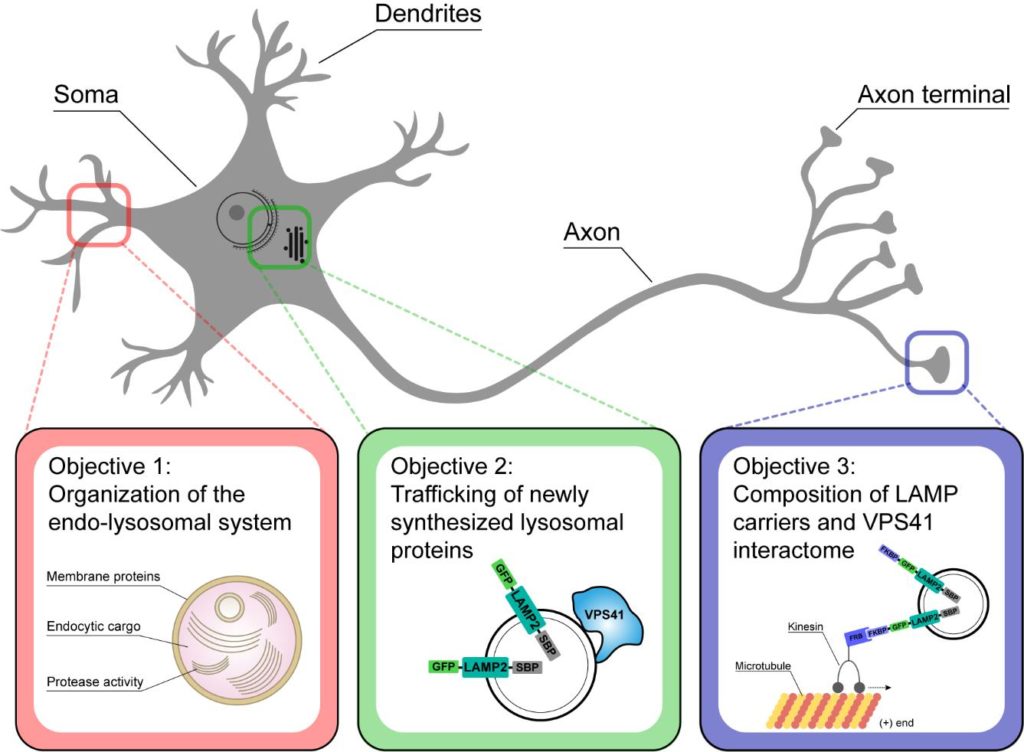 Schematic representation of the Main Objectives.